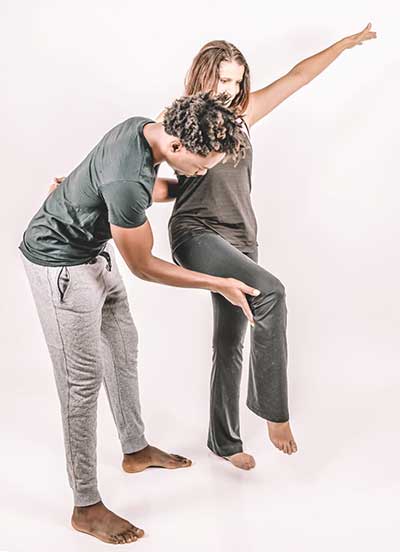 Laban Movement Analysis (LMA) is a method and language for describing, visualizing, interpreting and documenting all varieties of human movement.
LMA originated from the work of Rudolf Laban and developed and extended by Lisa Ullmann, Irmgard Bartenieff, Warren Lamb and many others.

“Bartenieff Fundamentals℠ is a construct that focuses on movement integration and harmony.” When moving, our coordination is affected by body connections, center of weight and the relationship to initiation and follow through of a given action.

Bartenieff Fundamentals were developed by Irmgard Bartenieff who studied with Rudolph Laban and colleagues in Germany (1925).

After coming to the United States in the 1940s, she became a physical therapist. She drew upon her complete background to develop a set of principles for corrective movement that came to be known as the “Bartenieff Fundamentals.”

Taiwo has received extensive training in this system, he is certified to analyze and understand human movement, practice application, analyze and comprehend individual movement patterns and functioning and provide suggestive ways of moving and thinking that are of greater value for an individual.

Through patterning/re-patterning sequences, he help people to recover from injury and/or prevent injury and to determine, through the patterning and organization of the entire body, why the injury occurred.

SHOW ME THE SCHEDULE
REGISTER HERE